CASTLES IN THE SKY: FANTASY ARCHITECTURE IN CONTEMPORARY ART 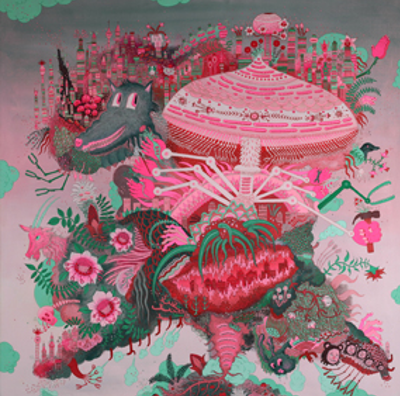 Coral Gables, FL, January 4th – The Coral Gables Museum is pleased to announce the upcoming exhibition, Castles in the Sky: Fantasy Architecture in Contemporary Art that will be on view at the Fewell Gallery from February 15th through May 15th, 2019.

The show is curated by Bartholomew Bland, the Executive Director of Lehman College Art Gallery in New York where it is currently exhibited through late January. At the Coral Gables Museum, it will be

accompanied by a series of related programs which include a lecture and a panel discussion with some of the participating artists and the curator.

Castles in the Sky explores imaginary architecture through the lenses of over twenty-five contemporary artists working in a wide range of media that go from painting, to drawing, to sculpture, to video.

The buildings in our mind’s eye are limitless.

Within our dreams, we unlock doors to unknown passages and climb unending stairs into the darkness of rooms, strange and never seen before.  Not tied to the reality of bricks and mortar or ground and gravity, we imagine any structure ―the American “dream home” on a coveted suburban cul-de-sac beyond our reach, or the wild acid-trip floating balloon palace of a magical unicorn.

Artists have long embraced the dramatic visual possibilities of “castles of the mind,” which allow them unfettered creative possibilities.

Jarring the laws of actual architecture, the imagined palace functions as a very real foundation, buttress, and pillar for Castles in the Sky. From Claes Oldenburg’s proposal to replace the Washington Monument with a gigantic scissors to Laurie Simmons’ photograph of candy castles atop a cake weathering a blizzard of confectionary “snow,” the works here delight and intrigue.

Many antecedents for this exhibition range widely, and its 30 artists gather inspiration from famous sources.

Lother Osterberg draws from the etchings of 18th-century Italian artist Giovanni Battista Piranesi, the creator of images of dark and cavernous space he fills with interlocking architectural elements that seem to continue forever ― the nightmarish side of the architectural dream. In a lighter key, Will Cotton’s candy castle represents a fantastical continuum of the art of 19th-century American landscape painter Thomas Cole whose influential Youth (1842), pictures a man rushing towards the mirage of a castle in the sky, the locus of all his youthful dreams. Throughout much of the 20th century, Salvador Dalí famously created a style of Surrealism that incorporated discordant buildings that seemed drawn from dreams. In Gala’s Castle (1974), an elephant on attenuated legs tiptoes across a castle crenellation, its ponderous bulk made as light as a spider. Today Adrien Broom adopts a similar Surrealism in her improbable scene of a proper Victorian woman whose drawing room, open to the sky, is filled with a zebra.

The artists in Castles in the Sky develop bizarre, impractical, enchanting and inspiring unbuilt (and likely unbuildable) designs.

In the 1960s, Diane Arbus who photographed Sleeping Beauty Castle at the very center of Disneyland, created a haunted, threatening palace amidst the sunshine of Southern California. Her photograph underscores the sinister quality that lurks under the surface of the archetypal Disney building, ironically dubbed the “architecture of reassurance” ― a place to feel safe and secure. For each work in this exhibition that is filled with enticing charm like the chandeliers that John Bowman populates with

cottages, there is another that is unnerving. Robert Hite’s tall, crooked houses look as if they were found in deep woods and conjure the tale of Rapunzel trapped in a tower by a witch.

The exhibition plays tribute to the ceaseless meanderings of the human imagination and the creative fantasy that hovers in the recesses of every artist’s mind.

Castles in the Sky

ABOUT THE CURATOR: Bartholomew F. Bland is a curator and writer based in New York City, specializing in contemporary and 19th-century American art. He is the Executive Director of Lehman College Art Gallery, The City University of New York, and was previously Deputy Director and Director of Curatorial Affairs for the Hudson River Museum. He has conceptualized and organized more than 50 museum exhibitions. In 2018 ― “Tick-Tock: Time in Contemporary

Lehman College Art Gallery was founded in 1984 to serve as an arts center for the people of the Bronx that would play a significant role in the cultural life of the borough. Today, the gallery is an innovative center of contemporary art where visitors from the Bronx and the Greater New York area can experience thematic group exhibitions that bring together famous artists with emerging talents.

About the Coral Gables Museum:

The Coral Gables Museum fosters an appreciation for the Civic Arts in Coral Gables. It explores and celebrates the history, vision, urban and environmental design, and cultural landscape of the City Beautiful within a broad audience that goes from children, families, and community members to national and international visitors. The museum optimizes its mission by cultivating effective partnerships, and providing programming that includes exhibitions, educational programs, lectures, tours, publications and special events.

View Calendar
A Spanish Royal in the Gables

Castles in the Sky: Press Release
Scroll to top