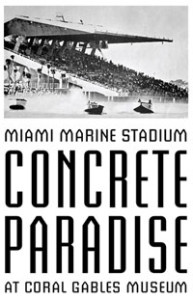 Every city has a building that is emblematic of its culture and history. New York has the Empire State Building and Paris has the Eiffel Tower. For Miami, Florida, that building is the Ralph Munroe Marine Stadium, a modernist concrete structure that looks like an origami rendition of the Sydney Opera House. Designed in 1963 by a young Cuban architect named Hilario Candela, this 6,566-seat stadium is a marvel of design and engineering that takes its architectural cues from Havana’s Tropicana Nightclub. With a football field-length roofline (356 ft.) that was the longest span of cantilevered concrete in the world when it was built, the stadium was designed for watching speed boat racing at a time when Miami was the epicenter of the sport. The Marine Stadium also mirrored the cultural heartbeat of Miami, hosting stars like Jimmy Buffett, Gloria Estefan, Dave Brubeck, the Beach Boys, and Ray Charles on its dramatic floating stage. Flamboyant enough to serve as a set for Elvis Presley’s film Clambake, it was also majestic enough to host religious services and political rallies.

Though shuttered and neglected since 1992 when the City cited unsafe conditions after Hurricane Andrew, Miami’s architectural jewel has continued to be a focal point for cutting-edge artistic trends. Graffiti artists and skateboarders have turned its ramps and raw concrete expanses into one of the nation’s most important venues for street art. Contemporary artists, engineering scholars, architects, photographers, and designers continue to be mesmerized and influenced by its soaring roofline and panoramic water views.

This exhibit features film clips, antique hydroplanes, videos of Parkour athletes’ stunts, site-specific graffiti murals, and much more, this multi-media exhibit will bring Miami’s most daringly modern building back to dazzling life. This exhibit is curated by Rosa Lowinger and Megan Schmitt, presented by the Coral Gables Museum, and supported by the Friends of the Miami Marine Stadium and the National Historic Trust.