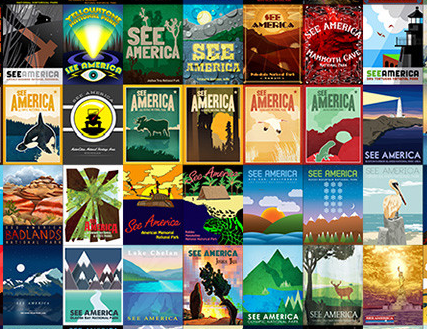 In the 1930s the U.S. government commissioned posters to showcase some of the country’s most stunning features under the banner of “See America.” Those original images helped link the natural landscape to an American identity, and they live on more than 75 years later as celebrated works of art.

Back in the 1930s, the “See America” project expanded awareness of existing national parks and monuments. Today, with hundreds more of these sites now established, a crowdsourced campaign was launched in 2013 seeking contemporary “See America” posters to showcase the country’s beauty for a new generation.

Displayed here are 30 of more than 1000 submissions received to date from over 500 artists worldwide. The entire collection can be viewed online at: www.seeamericaproject.com.
“See America” is a project of the Creative Action Network, in partnership with the National Parks Conservation Association. This exhibition originated at the Franklin D. Roosevelt Presidential Library and Museum.

Maria Sonia Martin: The Essence of Humanity
Scroll to top