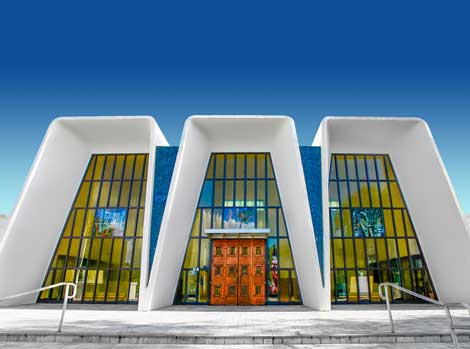 Established by a cluster of pioneering families who valiantly secured land in 1948 to build the Coral Gables Jewish Center, Temple Judea has grown to more than 600 households, and is proud to continue to serve as the only Reform congregation in Coral Gables.

Since its founding, Temple Judea has been committed to honoring the ancient traditions of Judaism, while acknowledging the need for the synagogue to remain relevant in an ever-changing secular world. World-renowned architect Morris Lapidus reflected Temple Judea’s chosen roles as a House of Worship, House of Study and House of Assembly in the design of the congregation’s permanent home on the corner of US 1 and Granada Boulevard, built in 1966 and recently awarded historic landmark status by the City of Coral Gables.

Featuring video, historical photographs and documents as well as sacred objects, the exhibit will tell the story of the City’s earliest Jewish community’s 65 year journey from a small building in the central business district to its landmark-designated campus, where it is a valued contributor to the richness of the surrounding community of Coral Gables.

The Big One: photographs by Barry Fellman
Scroll to top