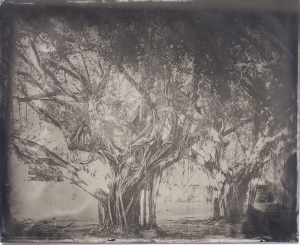 Employing ancient photographic methods (Wet Plate Collodium, a technique close to the Daguerotype), Spanish artist Miquel Salom depicts the beautiful trees of Coral Gables. In this manual process of recording images, the amount of light allowed in the negatives is a key element that affects the result. For Miquel, this project is also about “enlightenment” and “illumination,” as, following the exhibition, proceeds from the works auctioned will literally bring light in the form of electricity to 2,000 people in the villages of Northern Guatemala.

Remembering is one of the few human actions that cannot be censored. The process of choosing our memories, even when unfairly selective and hedonist at times, is always legitimate as it is an exercise of freedom – and yes, old times were certainly always better!

When it comes to remembering, Miquel Salom does not follow the rules of time. Making use of his artistic licenses, he creates memories of the present. His works are like two-way streets from and to the past. On one hand, they are visually and technically closer to the photography of the second half of the XIX Century – Wet Plate Collodion, the technique that succeeded the Daguerrotype. Unlike contemporary photography, it still requires a portable darkroom as the entire creation process is time-sensitive. Its results are delightfully imperfect and singular. On the other hand, the subject matter is current, part of our daily life; we are invited to observe it through Salom’s lenses.

In the series Lumen Lucernae, the artist focuses on the beautiful, centenary trees that distinguish Coral Gables as they inhabit its avenues and gardens. They are mostly of the Banyan species (Ficus Benghalensis,) brought to the city in the late 1920s as part of a beautification program, and are the pride of locals. With wide foliage and aerial roots that connect their branches to the ground, they resemble contained forests. In India, their native context, they are said to grant wishes and, certainly, there is something magical to the light that comes through their irregular open spaces among leafs, trunks and roots, creating reflections and blurry edges. This nature is reinforced by the aforementioned photographic technique. The softness of the images contrasts with the trees’ opulence; the aluminum plates grant a silvery quality to the whites in the photographs, and their dark edges are imprecise, as if they were the evidence of magical apparitions.

In fact, for Salom, the whole Universe is magically interconnected; each part affects the other, and men are able to have an impact on their own destiny: “The objective […] is to […] reveal […] the dual relationship of humans and the universe, using love as a connecting energy between their soul and their destiny”. This idea is evident in Lumen Lucernae (which translates from Latin as “light to give light”.[i]) The inspiration for the project stems from the artist’s reading of “My Road to Rotary”, the autobiography of The Rotary Club founder, Paul Harris, and it bears the philanthropic philosophy of this organization. In collaboration with Coral Gables’ Rotary Club, Salom will use the proceeds from the sell of the works to literally bring light (electricity) to poor villages in the North of Guatemala. This other kind of light will certainly be as magical as that of Coral Gables’ trees and, hopefully, will also be key in preserving that part of the Universe’s memories.

It is an honor for The Coral Gables Museum to be part of such noble enterprise, which is also strongly connected to our mission of exploring the natural and the built environment and celebrating the City Beautiful.

[i] Excerpt from the Artist Statement in: http://www.miquelsalom.com/statement-pensamiento/