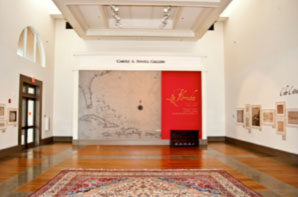 The Coral Gables Museum is proud to present a selection of 52 rare maps and plans of Spanish Florida that trace the European discovery, exploration and settlement of present-day Florida and other sections of the southeastern United States that were once part of La Florida. The exhibit is currently available for travel.

The exhibit fee is $4,000 for 8 week period or $6,000 for 12 week period.  The exhibit is shipped in four crates. The borrower is responsible for one-way shipping to the facility.

For information, please contact Caroline Parker, Director at the Coral Gables Museum, 305-603-8067 or via e-mail caroline@coralgablesmuseum.org.

The exhibit was made possible through the assistance of The Consulate General of Spain in Miami, Spain’s Ministry of Culture, España-Florida Foundation: 500 Years, The University of Miami Libraries, The Mandel Family, with Joseph Fitzgerald, Guest Curator.

The Glass House: “A Chapel in a Cathedral of Nature”
Scroll to top